A version of this article appears in print on January 9, 2013, on page B2 of the New York edition with the headline: Chinese Man Pleads Guilty In Copyright Violation Case.

Mr. Li, who was based in Chengdu, paid a network of computer experts to scour the Internet to find commercial software they could “crack,” meaning they bypassed security protocols designed to prevent unauthorized access or reproduction.

Ultimately, Mr. Li offered more than 2,000 pirated software products that could be used as applications in the military, engineering, space exploration, mathematics and explosive simulation, and sold them at a fraction of their retail price, which federal prosecutors said was over $100 million.

Among his biggest customers were an electronics engineer at NASA and the chief scientist at a government military contractor, but his clients also included students, inventors and small-business owners. Mr. Li sold the products for $20 to $1,200, accepting payments by Western Union and MoneyGram, according to government documents. 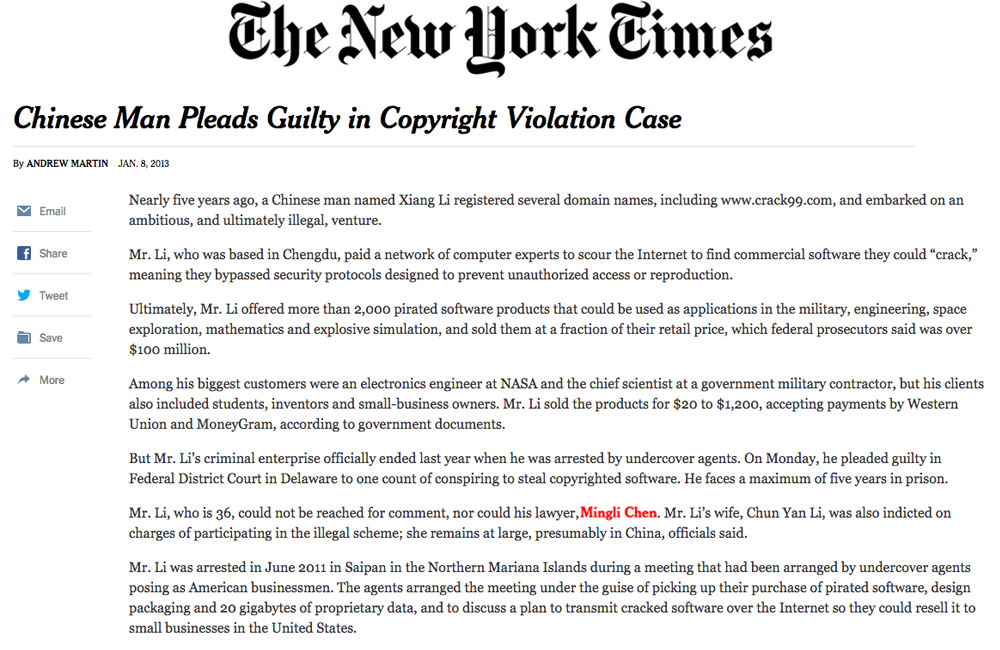 But Mr. Li’s criminal enterprise officially ended last year when he was arrested by undercover agents. On Monday, he pleaded guilty in Federal District Court in Delaware to one count of conspiring to steal copyrighted software. He faces a maximum of five years in prison.

Mr. Li, who is 36, could not be reached for comment, nor could his lawyer, Mingli Chen. Mr. Li’s wife, Chun Yan Li, was also indicted on charges of participating in the illegal scheme; she remains at large, presumably in China, officials said.

Mr. Li was arrested in June 2011 in Saipan in the Northern Mariana Islands during a meeting that had been arranged by undercover agents posing as American businessmen. The agents arranged the meeting under the guise of picking up their purchase of pirated software, design packaging and 20 gigabytes of proprietary data, and to discuss a plan to transmit cracked software over the Internet so they could resell it to small businesses in the United States.

After the arrest, agents recovered six disks from Mr. Li containing an assortment of data pirated from an unidentified American software company, including military and civilian aircraft image models and a software module containing data about the International Space Station.

Edward J. McAndrew, one of the prosecutors on the case, said Mr. Li’s arrest was among the largest criminal copyright cases to be successfully prosecuted by the government.

Mr. McAndrew and his colleague, David L. Hall, explained in court documents that once Mr. Li obtained cracked software, he would advertise it on his Web sites, which also included www.cad100.net and www.dongle-crack-download.com. Mr. Li’s customers would then wire him money, some of which he deposited in an account at the Bank of China. From February 2008 to June 2011, Mr. Li and his customers exchanged more than 25,000 e-mails about pirated products, according to the government, which obtained a search warrant for his Gmail account.

Mr. Li used his Gmail account to orchestrate more than 500 illegal transactions with customers in at least 28 states and more than 60 foreign countries, according to court documents. Software was pirated from more than 200 manufacturers.

One of Mr. Li’s biggest customers was Cosburn Wedderburn, a NASA electronics engineer, who bought 12 cracked software programs with a retail value exceeding $1.2 million. Another was Dr. Wronald Best, chief scientist at an unidentified government contractor that provides services to the United States military and law enforcement, like radio transmissions, microwave technology and vacuum tubes used in military helicopters. Dr. Best exchanged more than 260 e-mails with Mr. Li to obtain 10 cracked software programs, with a retail value of more than $600,000, prosecutors said.

Both Mr. Wedderburn and Dr. Best pleaded guilty to one count of conspiracy to commit criminal copyright infringement. Both are awaiting sentencing.

For instance, in January 2010, the agents bought a pirated copy of Satellite Tool Kit 8.0, a software product from Analytical Graphics that has a retail value of more than $150,000. The software includes several functions used by the military and intelligence communities, including three-dimensional warfare simulations.

Mr. Li’s e-mails suggest he was aware of the illegality of his venture, prosecutors say. “I am not a crack production engineers (my job is to collect)(.) This is an international organization created to crack declassified document (s),” he said in a 2009 e-mail. In another he wrote, “I need to use your money to seek the help of experts to cracker master I earn 10 percent of the profits.”

One customer asked who did the cracking. “Experts crack,” Mr. Li wrote. “Chinese people. Sorry can not reveal more.”